In the early 1970’s psychologists and counselors began to be interested in how people got into and stayed in relationships. During that period of time, the number of people who were divorcing began to rise dramatically to nearly 50% and has remained there for a decade.

Why do people want to get married if there is such a great possibility that the relationship will fail, or even if they stay married they will not be happy? We met when we about 30 and working with couples who were struggling to decide about staying together. 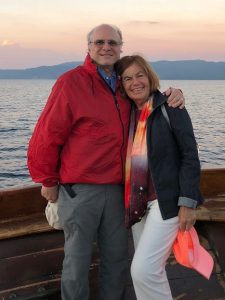 At the very same time, we were ourselves, falling in love. If we wanted to be happy and loving, what could we learn from our patients and the mentors who trained us? That is exactly what we set out to determine and over the past 40+ years we have learned a lot and helped a large number of couples.

We invented something we call “Couple Power.”

We are clinical psychologists who have enjoyed studying and working with couples for more than three decades, and we have been happily married to each other for just as long.

Together, we have written several books and articles, including Lifelong Love: 4 Steps to Creating and Maintaining an Extraordinary Relationship, Couple Power Therapy: Building Commitment, Cooperation, Communication, and Community in Relationships (2006).

We co-founded Couples Coaching Couples, a growing nationwide movement providing mutual support to couples in their communities. We have presented to a variety of groups, including personal growth centers, businesses, schools and professional organizations, such as the American Psychological Association.

We often give media interviews on radio and television and in newspapers and magazines regarding relationships, including a regular segment on our local radio morning talk show. After extensive training in couples, family and sex therapy in California, we moved to Charlottesville, Virginia, where we now both teach and practice.

We also give workshops for couples, counselors and other professionals around North America.  A number of books, CD’s, videos and podcasts of our work are available.  We have two adult children who are also happily married.

Phyllis R. Koch-Sheras, Ph.D., is a practicing clinical psychologist and co-author of several books on dreams and couples, including Lifelong Love: 4 Ways to Creating and Maintaining an Extraordinary Relationship (2012), Couple Power Therapy (2006), The Dream Sourcebook (1995) and Dream On: a Dream Interpretation and Exploration Guide for Women (1983).

She and her husband, Dr. Peter Sheras, also a clinical psychologist, have been married 37 years and have two grown children and one grandchild. Together, they lead workshops for couples and have founded the non-profit organization Couples Coaching Couples, which continues to support couples in cities across the country for over 20 years.

His publications include Your Child, Bully or Victim ( 2004), I Can't Believe You Went Through My Stuff (2006)  and Clinical Psychology: A Social Psychological Approach (1979).

He has a Diplomate in Clinical Psychology, is a Fellow of the American Academy of Clinical Sexologists and past president of the Virginia Psychological Association.

He was born in Chicago, Illinois and received his BA from Yale University, his MA and Ph.D. from Princeton, and trained intensively in clinical work at Rutgers and the VA Medical Center in Palo Alto, California.

Peter appears frequently as an expert in the media on topics of couples, adolescents and families. He is also a professor in the Curry Programs in Clinical and School Psychology and Past- Chair of the Human Services Department in UVa's Curry School of Education. In addition to is academic and research appointment, he has practiced as a clinician for more than 40 years.

Thanks for your message! We’ll be in touch soon.